For show number 5 in Europe, we opted to play in a new creative space known as de tanker (“the tanker”).  From afar, it wasn’t apparent as a venue:

Especially from the freeway vantage point:

The drummer’s view with the freeway moat behind the chairs. Later, people in the apartments across heard us playing and came over to listen.

The de tanker is a community space first and foremost – here, handmade musical instruments await the next time they will be played in the neighboring park forest: 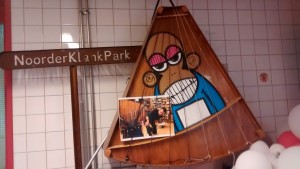 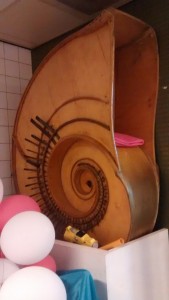 They were huuuuuge – and when mic’d, the one on the right (the large thumb piano) was said to reverberate throughout the forest.

And what a lovely (as the Brits say) and wonderful space the de tanker is.  They even host events specifically aimed at LONELY PEOPLE.  These people are loving and we hope they continue to operate with community support and investment.

The duo My Kingdom for a Horse had an opening hand shake and took time off from their scholarly pursuits to play the show with us.  Beautiful soulful singing and we were happy to share this show with them. 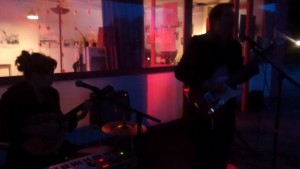 After the show, our host and co-operator/founder of de tanker biked our heavy equipment and backpacks to her home (where we stayed) in this handy cargo bike common in Amsterdam:

As requested on our sticker-back, one person tagged us on Twitter to show us where he stuck it:

We stayed in an AirBnB near the city center, with just one room but quite a nice view:

It was soon nourishment time – we found a great vegetarian/vegan deli within a bike-ride from our place:

We rented bikes very cheaply, parking them by the canal here. 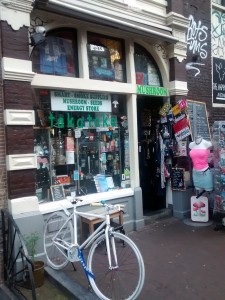 The shop above was owned (or at least “manned”) by a (very high) Greek. I do not think that was a ghost bike.

Above, as demonstrated by Rob.

There is some controversy as these tiny cars speed through bike lanes. Some say they are driven by “lazy” people whereas others acknowledged the people may have disabling conditions and therefore unable to bicycle. Either way, my first thought was the opposite (“Cool – tiny cars, not SUVs.”)

Though you cannot add any additional houseboats or obtain an expensive license for one, you can rent out or buy one. (Added to list of Things to Try before Die.)

On a canal tour, we saw a version of busking – a man who played wind instruments on his tiny boat while floating through the canal:

Found this in the Amsterdam museum.

As I sum up our Amsterdam stay (mostly pictorally) here from the Atlantic (sailing back from England to USA) I will cut this short. The last time we’d visited the Netherlands was 2002, and the process of memory versus actual place and experience was felt.  Is it always this way in travel?  Some variables that have changed since our last visit:

* repetition (can you ever see/experience a place the same after it’s been seen once?)

* context (touring this time around – honeymoon the last time)

We were happy to find de tanker as a place to root our travel to Amsterdam and discover the thoughts and opinions of locals.  We heard that Amsterdam is not as progressive as assigned by many – if you want cutting edge thinking/art go to Berlin.  And that, indeed, was our next stop.