“An adventurous mix of down-tuned guitars, atonal vocals, and lyrics that are alternately dark and funny.” –Author Eddie Hoffman on Signals

“As the human companion to several dogs over the years, there are aspects of the song and accompanying music video, premiering below, that I find moving and affecting – the referenced detail about smudges remaining in the mirror is especially heartbreaking, yet ‘Departures I’ moves past feelings of anguish toward something warm and reassuring.”

Via Twitter “Beloved Binge create a superb aural soundscape to big city indifference on the title track to their forthcoming Signals album.” — and in the review: “If the entire contents of their 6th album are just as raw and atmospheric as this track then it deserves to consume our attention.”

Beloved Binge’s move to NYC and apartment-hunt was featured in Sunday’s “The Hunt,” a long-standing column in the New York Times.

Recorded in Athens, Greece, Beloved Binge’s 2016 ep Never, the end is available for purchase digitally through itunes or Bandcamp.  There are a few limited edition Garfield bookmarks available with download codes for the entire ep. Email us for options.

Press for Never, the end

Media for prior releases contains (in order):

“The spirit of the band is still playful, even as it tackles weighty themes…Pockets is Beloved Binge’s fullest-sounding and most confident record to date.” – Bryan Reed, Independent Weekly

“These two tackle drums and guitar with energetic arrangements and a delightful sense of play.” —Ashley Melzer, The Mill, from feature on Beloved Binge “Gimme 5.”

“Reminiscent of groups like the Moldy Peaches, [Beloved Binge adds] a humorous touch to lyrics that might seem dark otherwise.  Beloved Binge pulls out lighthearted pop-punk jams with its fourth studio album, Pockets.  It will certainly leave listeners with plenty of catchy riffs to get stuck in their heads.”   —Daily Tar Heel, Diversions

“Their latest album Pockets is quite an emotional journey. The music is something to indulge in, it’s not meant to be a fleeting moment on your stereo.” —Scrink blog

STPP festival in DC, Unification of + and –

Thank you video for Pockets

Songs from all releases can be found here on Bandcamp.

Live at the Local 506 (Chapel Hill), by Temples of Gray

Live at the Carrack

Live at the Pinhook, by Bonnie of Sequoya

Painting by Bonnie of Sequoya (& Ellertronic)

Live at the Pinhook, by Bonnie of Sequoya

Live at the Flicker Theater & Bar by Eric Griffith 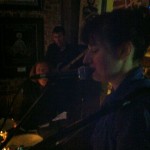 Beloved Binge plays rubble pop rooted in a punk pot with a hint of old Greek village mountain uprising, interpreted through traditional rock-n-roll drum-guitar-bass-keys arrangements, and boy-girl harmonies with a sprinkling of bouzouki.

Beloved Binge began in 2003 in Seattle’s Capitol Hill following a six-month trip and hiatus from their previous band. Beloved Binge performed at Graceland, I-Spy, Sit & Spin, and more while in Seattle, then released their debut album, Beloved Binge, with friend and engineer Scott Waite on bass. In 2005 they moved to Durham, NC because it’s closer to Greece , packed full of musicians and culture, and causes less weather-related deaths.

As a duo, Beloved Binge toured in 2006 for the first time, an experience which facilitated Eleni penning the human-loved song “Miso: I don’t like people.” Subsequent tours were more favorable, and for a year from 2008 – 2009 Beloved Binge toured all over the nation in a Westfalia camper van with their dog Syba and Eleni’s documentary Seeing Through the Fence. This resulted in over 25 news articles about their DIY tour.

The 2009 tour was cut short when Eleni’s best friend and father died unexpectedly in Greece. After a trip back to the memorial, Beloved Binge continued to tour in 2010 and played a SXSW movie premiere afterparty. In September 2011 Beloved Binge recorded their 4th album (to be released Fall 2012 as Pockets) on the two- year anniversary of Eleni’s father’s death, then played a Hopscotch Day party the next day. Beloved Binge continue to perform around the Triangle, NC in 2012.

From Shrieking Shack Shows (Lexington, KT):
“this was an awesome show–how much talent can you squeeze into a 2 piece–he plays guitar, she sings, plays keyboards, and plays the drum kit–catchy songs that stick in your head for days–now they are a pop band–but with that cool indie garage ethic–”

Bryan Reed, Independent Weekly (Durham/Chapel Hill, NC):
“Sitting behind the drumkit, Binge not only sets the rhythm but sings, plays keyboards and plays guitar. Like her own motion, Beloved Binge songs are busy, using shifting rhythm and keys and two different verses sometimes sung at once.”

From One Base on an Overthrow (Connecticut Blog):
“Toy xylophones as instruments, playing drums and keyboards at the same time, banging on guitar strings like a percussion instrument…on this particular night it agreed with me fine, especially the blown-out Dinosaur Jr. part in “Married on Myspace” and the minimalist indie rock throb of “Miso (I Don’t Like People)”– ‘I don’t like people, but still, I’m trying.'”

“The spirit of the band is still playful, even as it tackles weighty themes…Pockets is Beloved Binge’s fullest-sounding and most confident record to date.” – Bryan Reed, Independent Weekly

“These two tackle drums and guitar with energetic arrangements and a delightful sense of play.” —Ashley Melzer, The Mill, from feature on Beloved Binge “Gimme 5.”

“Reminiscent of groups like the Moldy Peaches, [Beloved Binge adds] a humorous touch to lyrics that might seem dark otherwise.  Beloved Binge pulls out lighthearted pop-punk jams with its fourth studio album, Pockets.  It will certainly leave listeners with plenty of catchy riffs to get stuck in their heads.”   —Daily Tar Heel, Diversions

Chris Conti of the Providence Phoenix (Providence, RI):
“An amalgamated blast of lo-fi and fuzzy Garage rock with a twist or two or three, Blender Theory defies description for the most part, and ain’t that a good thing nowadays? The opening track “(Got) Married on Myspace” bobs and weaves from jangly pop to something akin to a Sleater-Kinney B-side with some seriously strange breaks in between. “decoy” and “Heartburn” belong on your summer playlist…”

Duluth Budgeteer (Duluth, MN):
“With a sound as infectious as this, Beloved Binge can keep on singing about Lordonlyknowswhat and people will still be listening…..What’s most striking about this album, however, is that no matter how absurd the lyrics get…the more you want to listen.”

Feature in the Olympian (Olympia, WA)

Ross Grady, trianglerock.com (Durham/Chapel Hill, NC):
“The countdown is on…all the pieces are falling into place for their year-long tour starting this fall. See ’em while you can, because you know you’re gonna miss their off-kilter gtr/drums call-and-response artrock.”

The Independent Weekly:
“Beloved Binge “delivers plain-spoken, pensive songs…downright thrilling for those on the receiving end…”

David Menconi, News and Observer, from Critic’s Picks:
“…it’s nice to have Seattle’s transplanted Beloved Binge…in our midst. On “Other Places”…the tandem of Rob Beloved and Eleni Binge play stripped-down punk rock that doesn’t feel thin, combining the howling abandon of Sleater-Kinney with a very fine attention to poppy detail…”

Independent Weekly, from Music Worth Leaving the House For:
“If Lee Ranaldo and Fontaine Toups had wed, Beloved Binge …would have been their Teen Beat babies.”

Diversions:
“Beloved Binge…brought with them a sound that is as rooted in Northwestern lo-fi pop…as it is in East Coast (specifically D.C.) punk…[and] succeed in creating varied songs…the band can…craft a catchy melody, but also knows when to step on the distortion pedal.”

The Raleigh Hatchet:
“…a truly unique duo. Right off, the delightful spin of “New Year” is “Faces,” which features Eleni’s talent for balancing vocal harmony and power. It also shows the knack Beloved Binge has for transitioning into completely different rhythms flawlessly…”

Independent Weekly:
“Like wonderful Chicago co-eds The Spinanes, Beloved Binge hustles through minimal guitar-and-drum pop obsessed with sparseness, space and sear. But they do it with the gumption of 764-Hero and, occasionally, the enthusiastic bluster of Sonic Youth.”

Eleni Binge interviewed for Herald-Sun article about Marry Durham festival that Beloved Binge performed at on 3/17/2012.

Here are some stations playing Pockets.  Feel free to request songs from the album at your local station.  If your station is not playing Pockets, we’d be happy to send them a copy.  Let us know or have them get in touch with us here.